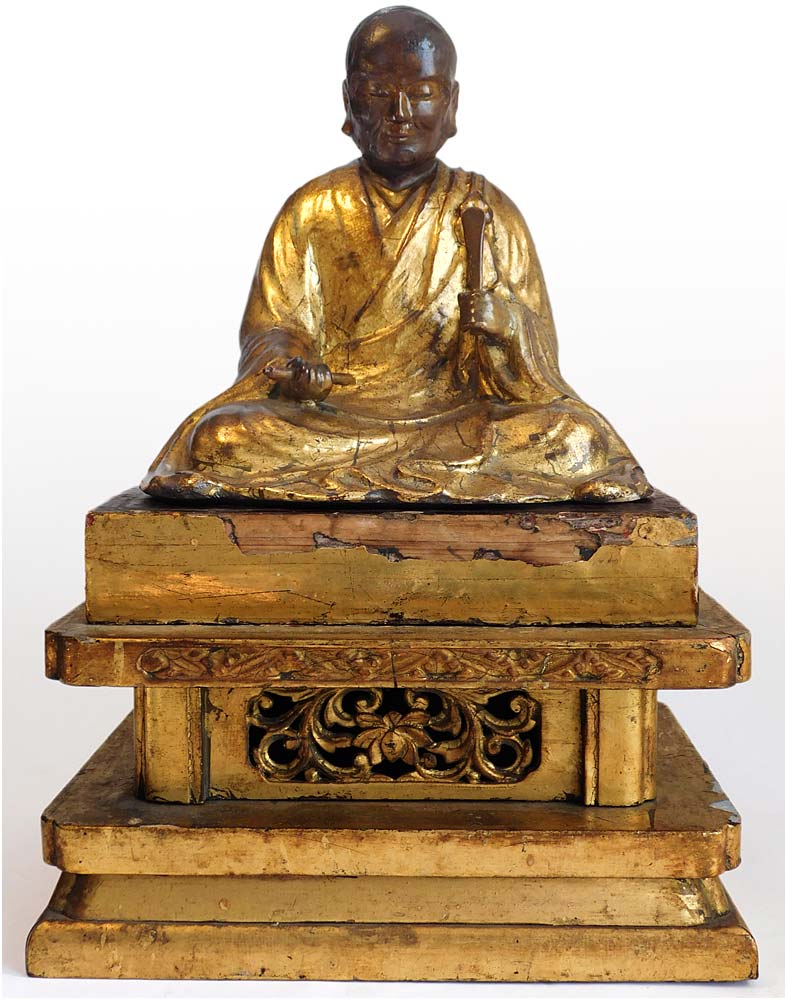 Antique Japanese Joined Hollow Blocks Statue
An eighteen century Japanese wood shrine of Nichiren Daishonin 日蓮聖人(1222–1282). The master is seated in meditation above a six tiers wood pedestal. Cloaked in a voluminous floating monk robe, firmly holding a Lotus Sutra scroll in his left hand, and a Keisaku in his right. The face of Nichiren is delicately modeled with superb realism. Eyes downcast in mediation, his serene expression is enlivened with crystal-eye inlays. In style, the alluring form of the Dai-Bosatsu alludes to the symmetrical equilibrium in Chinese tradition. Both the figure and pedestal are constructed in joined blocks known as yosegi-zukuri 寄木造. In which the head is composed of the front and back half, the torso and shoulders are joined with separate blocks, and for the legs and the forearms in five sections, completed with the crystal eyes inserted inside. This delicate Anei era statue is gilded with pure gold over an oyster shell gesso mixture, creating an effect reminiscent of gilt bronze sculpture. Signed and dated on the shrine interior, well preserved with no significant defect, other than the aged related cracks and gilt losses noticeably on the pedestal front and the back of the figure.

Nichiren was a Japanese Buddhist priest who lived during the Kamakura period in the 13th century. He taught that the title of the Lotus Sutra, "Namu Myōhō Renge Kyō 南無妙法蓮華經" is the central mantra that encompasses all Buddhist teachings, and its recitation would quickly elevate all beings to attain enlightenment in their present lifetime, no matter what their status and capacity. Today, Nichiren Buddhism is considered to be a branch school of Mahayana Buddhism. Traditional temple schools such as the Confederation of Nichiren-shū and Nichiren Shoshu temples, including numerous modern lay movements with varying views of Nichiren's teachings and identity, ranging from being the Buddha of the Latter Day Law: Buddha of the Degenerate Age 末法; to the identity of "The Primordial Buddha 本仏", and the reincarnation of Bodhisattva Visistacaritra, who attends Gautama Buddha and protects the Lotus Sutra and its devotees. 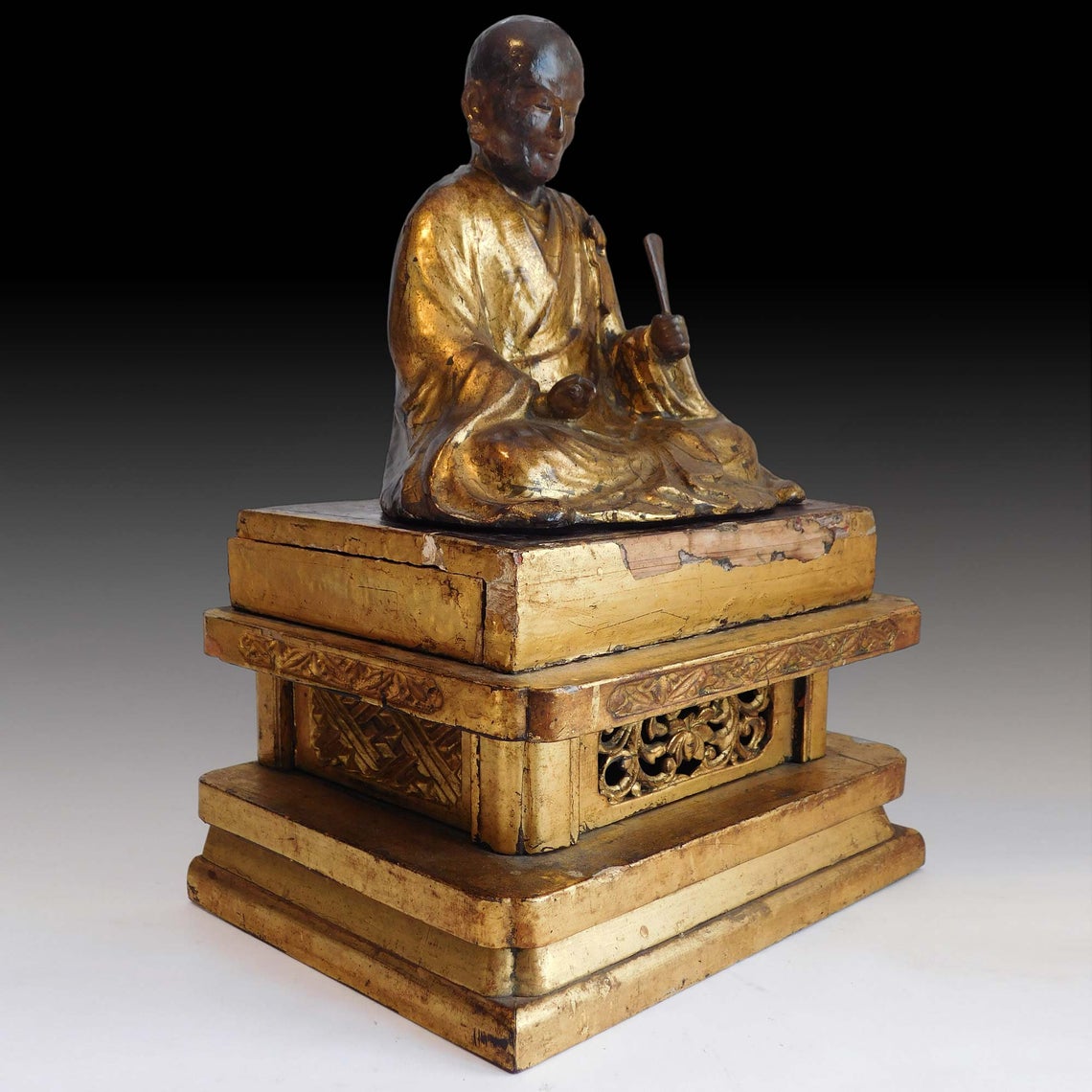 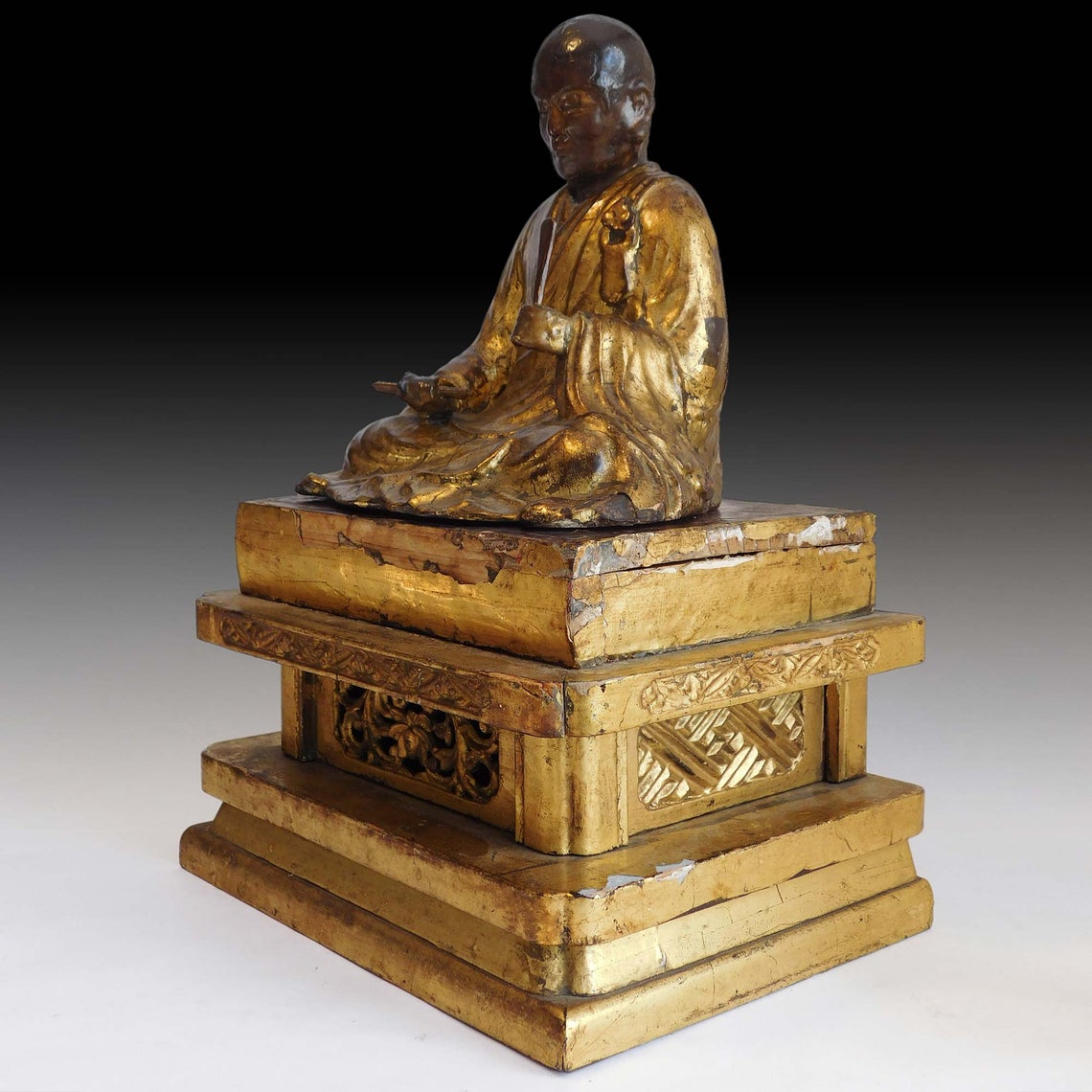 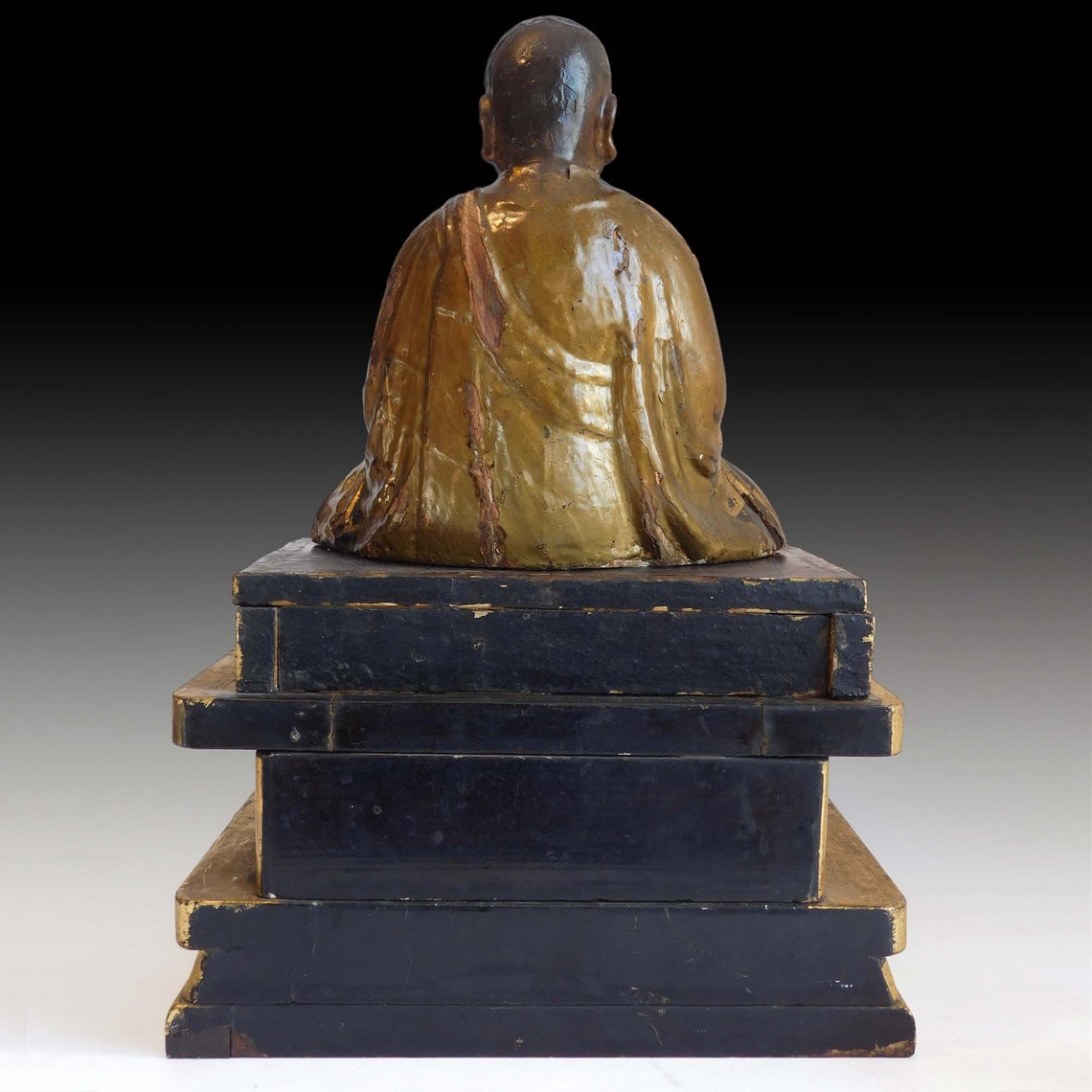 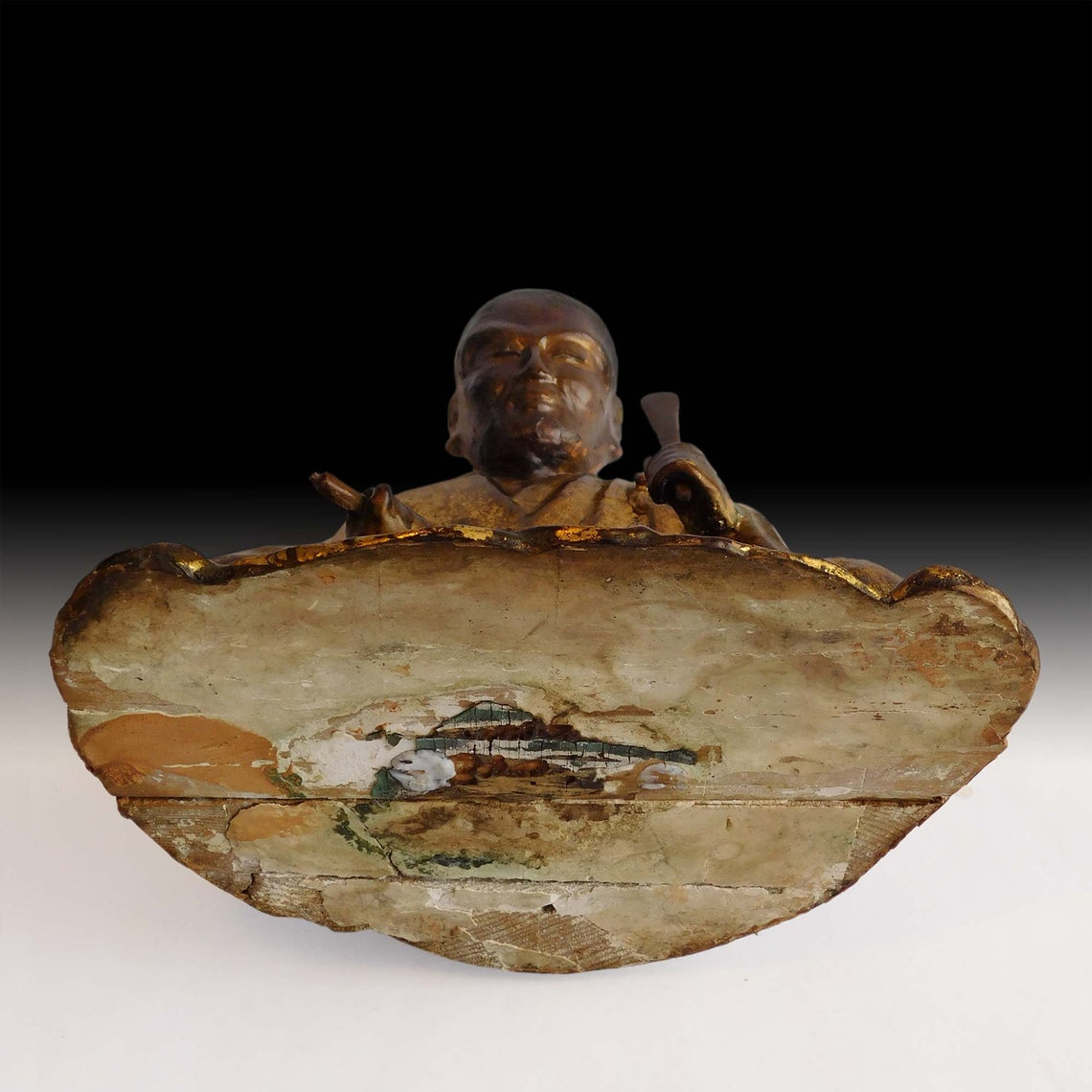 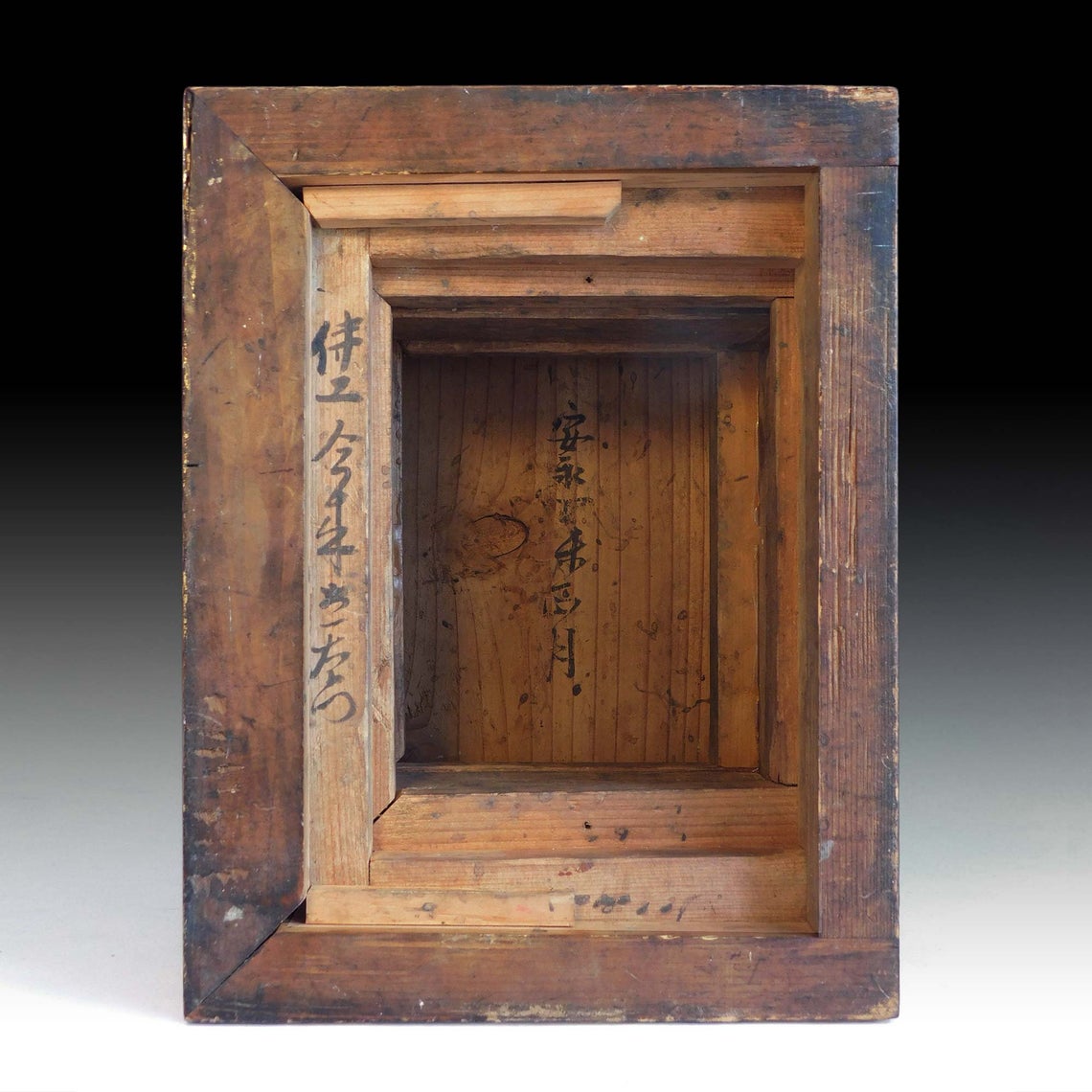 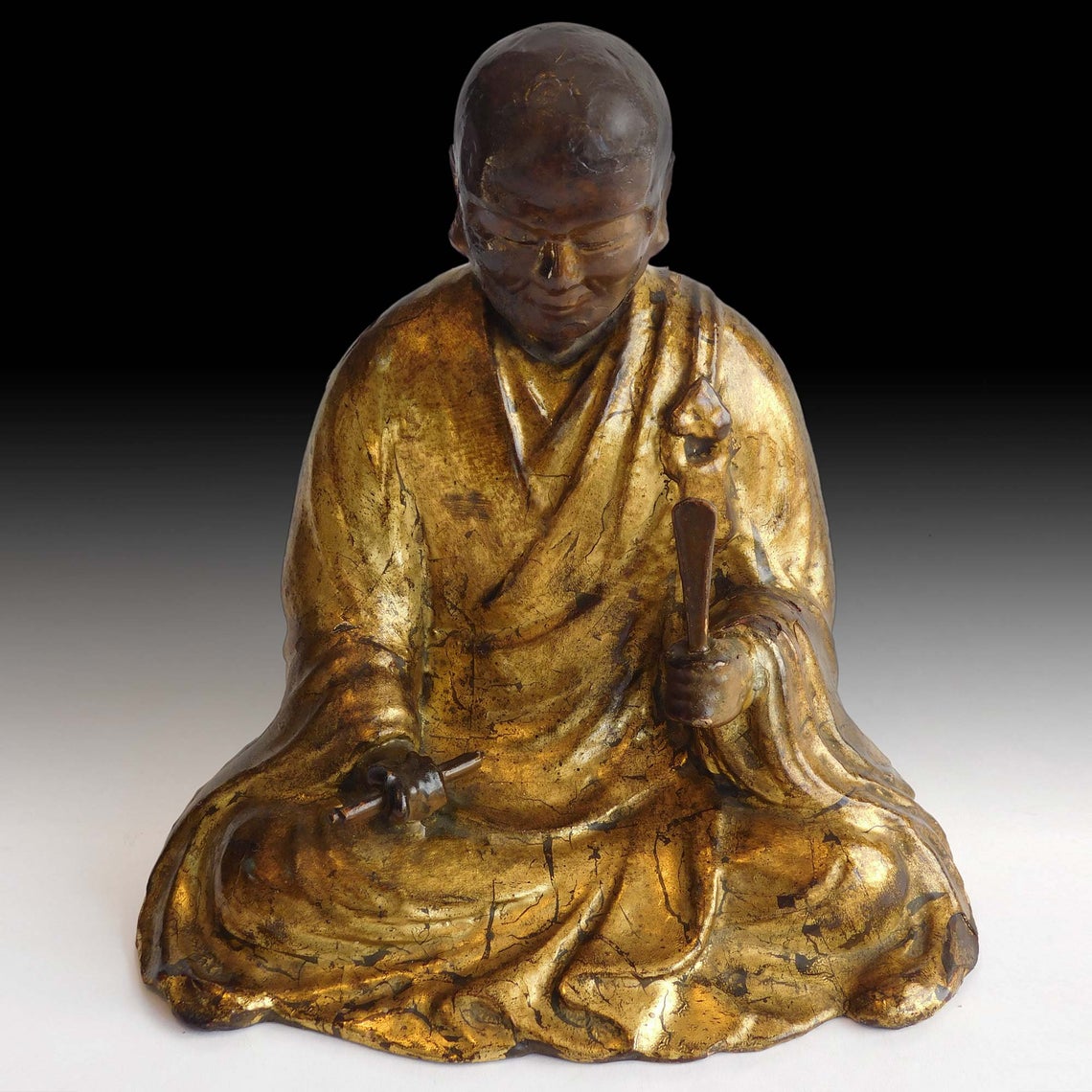