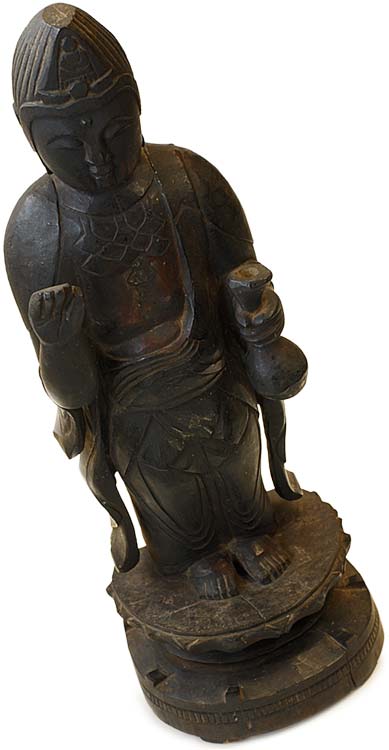 Antique Japanese Fruit Wood Carving
A powerful Edo era Kannon in dark fruit wood, hewn in modified itto-bori, or one-knife carving technique, also called "to no kiri" (sword cut carving,) producing a faceted surface, with each facet reflecting a single cut. "Ittobori, " means "every stroke counts," because the artist’s full concentration goes into every cut of the carving tool, a flat, square-shaped chisel called a sarukiri. However, Sanano-ittobori have survived among farmers in Yamagata Prefecture for more than a thousand years.

This itto-bori Kannon is dramatic in its simplicity and the solidity and weightiness of its form. Every detail is summarily carved with great skill, achieving an effect of monumentality in the serene face and head, the crown bearing a geometrically abstracted figure of Amitabha, of whom Kannon is an emanation. The right hand is lifted in the abaya mudra of no-fear, while the left holds the vase of nectar, a symbol of the great compassion of Kannon. Including the undercut trailing scarves, the parallel folds of fabric and the lotus base set upon an ornamented plinth, all elements have been boldly preserve and aged beautifully. 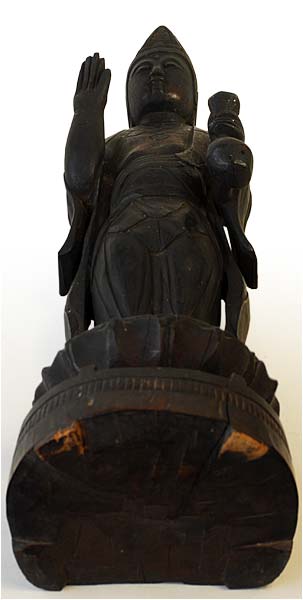