Antique Japanese Carved Wood Buddha
A spirited wood carving of the 6th Century Indian sage Bodhidharma, the blue-eyed Brahmin who arrived in China in A.D. 526, is known as the Japanese Zen Patriarch Daruma. He is regarded as the chief of the Six Patriarchs of Buddhism. He teaches that perfection must be sought inward through meditation rather than outward observances. It is said that after the first nine years of prolonged meditation, Bodhidharma cuts off his eyelids and threw them on the ground, where they flowered into the first green tea plants. Here in this representation of Bodhidharma, with the glass-eyes inlaid, the Zen Master looks out intensely in a wide stare. In honor of Daruma, an early form of the tea ceremony is performed in Zen monasteries throughout Japan. 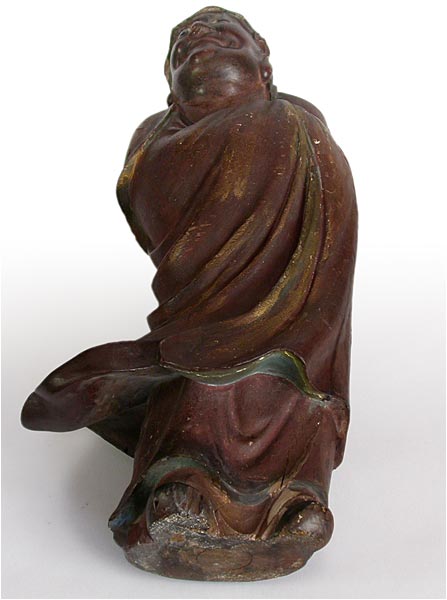