Chinese Polychrome Gilded Wood Buddha
With a powerful presence emanating from this statue, this gilt and lacquered wood carving of the God of Wealth dressed in Ming robes and armors is very well carved. Though time has diminished some of its former radiance; his warrior class is clearly indicated in the commanding mudra shown in his right hand. It appears that this shrine statue has been consecrated with a ritual blessing. There is a certain ritual offering embedded in the hallowed space in the back of this statue, to which a rectangular wood plug is secured to keep this substance in place (respectfully, it is untouched by our reviewers). Evidently the incense smoke darkened areas and paint loss indicated that the statue has been used for worship for hundreds of years. Despite its age, large portions of gilt are remaining, and the wood carving is well preserved in very good condition.

The Star God of Affluence Cai Sheng is one of the most recurring themes in Chinese folk art and Taoist sculpture. His shrines are practically worshipped in every home in China. As recorded in Chinese legend, he is considered to be the sage Pi Kan of the 12th century B.C., who reproved the evil conducts of emperor Chou Hsin of the last Shang dynasty (16th century-1050 B.C.), whereupon the emperor ordered the sage's heart cut out in order to prove if there were seven orifices, as commonly believed to be the case in the heart of great integrity. 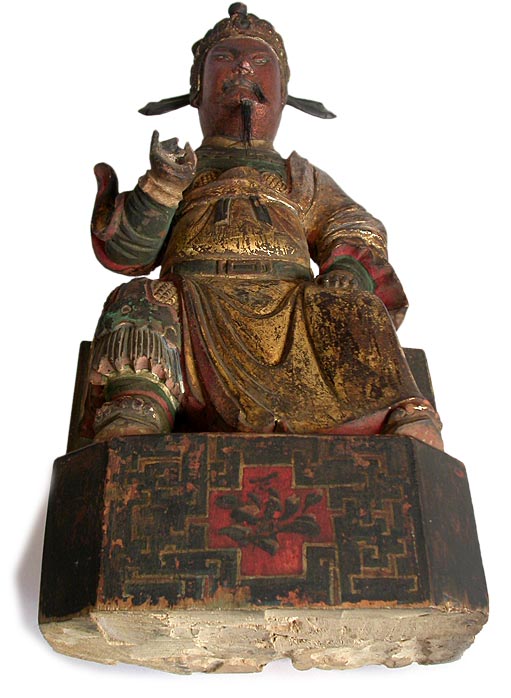