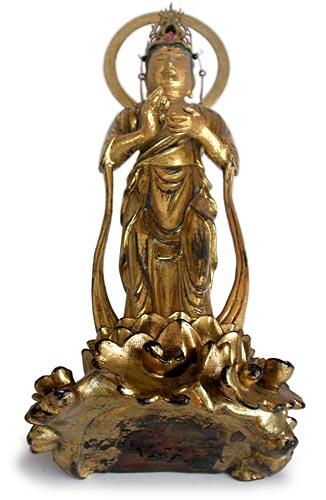 An exquisite Japanese Miroku Bosatsu, standing on a lotus pedestal above stylized roaring clouds, with hands in the dharma-teaching mudra, (which may had held a vase and a lotus). The Buddha’s downward cast eyes, the benign profile and slight smile, in a marvel of subtlety emitting deep feelings and an uplifting compassion. Above the superb rendering of the mystic face, he wears a jewelled crown, with a gilded copper halo mounted to the back, and two long scarves framing the figure’s undulating layers of lambent drapery, thoroughly coated in black lacquer and gilded in gold. Although the left sash appears to be restored, and there are regilding shown both in the hands and face. Despite these minor imperfections, the essence of the Buddha’s light shines forth harmoniously.

Miroku (Maitreya), originates in a historical person, who was a disciple of the Historic Buddha, later became a bodhisattva in the Buddhist tradition, known as The Bodhisattva of the Future, who will be a successor of the Buddha and teach the dharma in eon of time. Miroku has been worshipped in Japan since the 6th century, and the faith in Miroku as the savior became widespread in the 13th century. As depicted here in this image of Miroku descending to earth on clouds, the perfect symmetry and proportions, pronounce facial features and drapery of this statue are stylistically adhered to the tradition of Kamakura period; in addition, the refined delicacy suggests the influence of Kaikei, who received the title of hogen in 1220s’. 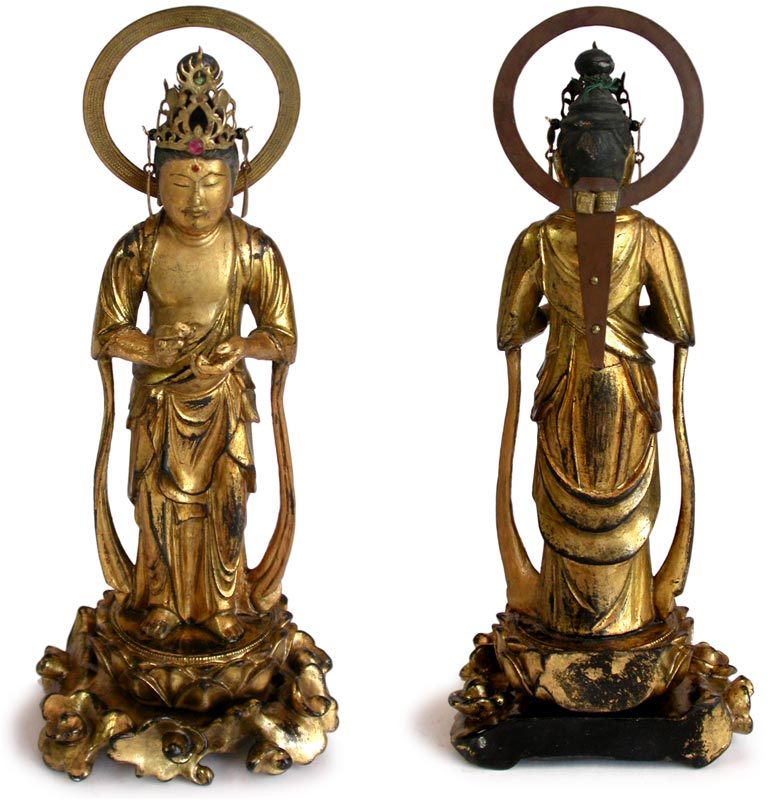