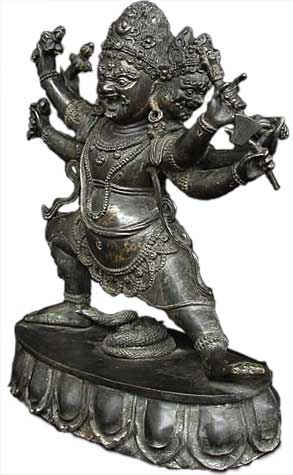 Antique Chinese Bronze Statue
In Tantric Mahayana tradition, Vajrapani is believed to be the last Buddha to appear in the world, yet Vajrapani is frequently the first Buddha to appear at the entrance of a Buddhist temple. Vajrapani is one of the ten Dharmapala Bodhisattvas. He is often portrayed in his fierce emanation, in which he is a powerful Protector of Dharmar and remover of obstacles. Vajrapani is originally grouped with Avalokiteshvara and Manjushri. The three celestial Bodhisattvas are archangelic protectors; as Vajrapani representing power , Avalokiteshvara representing compassion, and Manjushri wisdom.

The grandeur and dense black body of this Vajrapani is a superb example of the naturalism and monumentality of the 15th century Tibetan Buddhist art. The statue is induced with spirit and poise, his terrific appearance illustrates his triumpth of the Snake Demon Naga. This superbly cast piece is detailed with tongues and teeth in three howling heads, with eyebrows patterned in upturn waves, and swirling scarves that pass around his shoulders and flutter to the sides. Vajrapani, also the God of War, is shown thrusting six wide stretching arms in an active warrior pose (pratayalidha), alertly poised in the threatening gesture. With the exception of one hand that holds a battle axe which conquers the force of evil; the other five hands of Vajrapani are shown holding various vajra scepters that symbolize all supreme power of the divine Indra, which is capable of transforming all negativity into bliss.

This statue is in the tradition of the later Tibetan art when it had penetrated deeply into the cultures of China, Manchuria, Inner and Outer Mongolia. Though in the 1500s, Chinese workshops were already prolific in Tibeto-Chinese Buddhist art , there is little distinction among the regional schools of this Tibetan-style. Elements of this sculpture such as the smooth, sleek, active and broad planes of the body, can be taken as indicative of the Tibeto-Mongolian school around 17th century. 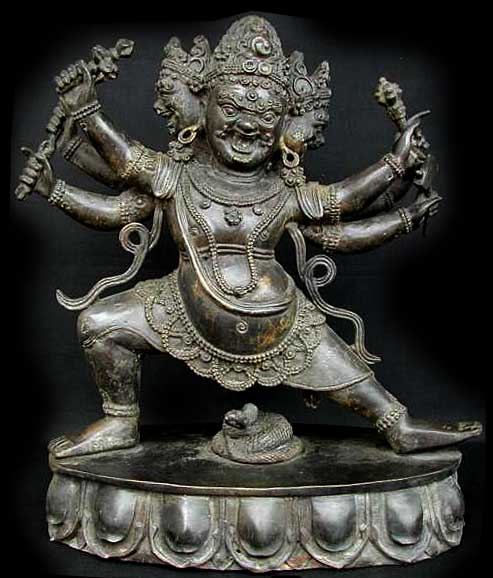 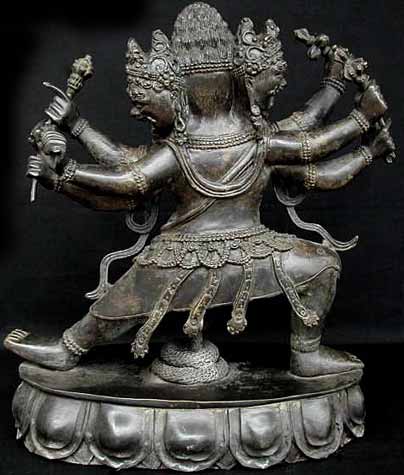 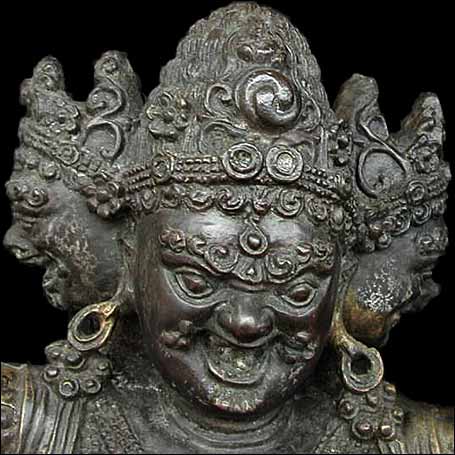