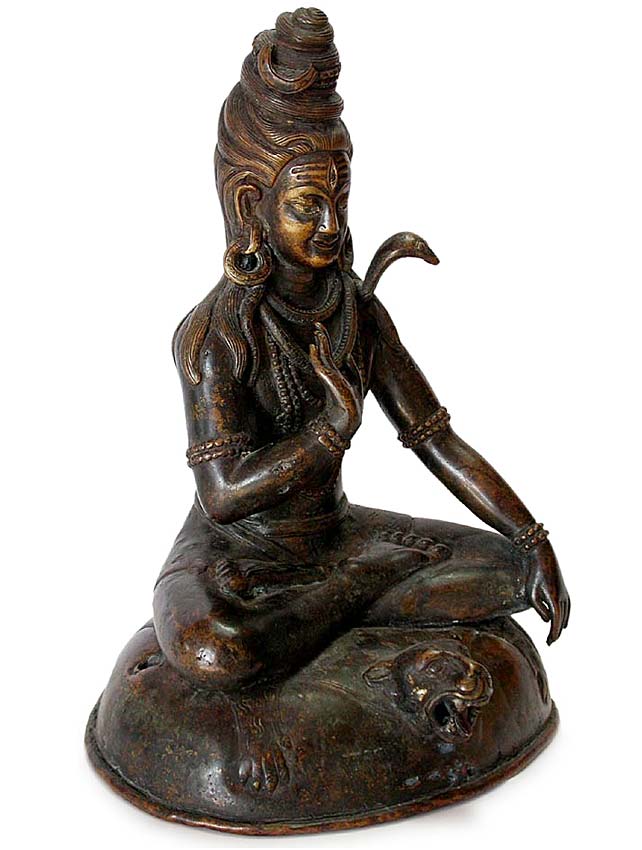 Antique Nepali Hindu Bronze Statue
Shiva, literally means “The Supreme One”, the lord of the inner self, who embodies the three aspects of divinity, as creator, preserver, and destroyer. The oldest deity who has been worshiped since prehistoric time. He is venerated as the Lord of Yoga, and the patron God of renunciate and ascetic. Which evolved into a pan-Hindu tradition practiced widely across all of India, Sri Lanka and Nepal.

There is a life-like quality in this statue of Shiva meditating above a burial mound, liberating the Atman within from the darkness of ignorance by dissolving the bond of ego. He is shown legs crossed in full lotus (dhyanasana), seated on the skin of a howling tiger, which has a protruding head that reveals an intriguingly hollowed interior. The left hand of Shiva is resting on his knee in the earth-pointing gesture (bhumisparsa), and right hand raised in no-fear (abhaya mudra), in which five delicately modeled fingers gracefully imparting a shakti evoking swastika in an opened palm. His youthful and robust figure is sculpted with subtle naturalism and great precision, adorned with arm bracelets, three strands of beads on his chest, and a spirited cobra garlanded around his neck. The face of Shiva is rendered with a high level of realism that constitutes a hieratic countenance. His full lips are well delineated, and there appears to be a traces of saffron or red pigment, as is also found on the swastika, and on the tiger tongue. His large eyes and double eyelids are definitively of Tibetan design; of which are casting downward in a detached inward gaze, a direct contrast to the powerful third eye in the ajna chakra, which symbolizes the wisdom to annihilates desire. Also on his forehead is a tilaka drawn with sacred ash (bhasma), a three-lined symbol that constitutes the Holy Trinity Shiva, Brahma and Vishnu. A crescent moon that symbolizes perfection is pinned to the right of the three-knotted braid, where deeply chased paralleled hairlines fall around his shoulders and run covering his back.
As Shiva is said to have hair like molten gold sunset reflected in the Ganges River. Incidentally over flickers of amber hue on the earth tone patina, an intriguing effect of a matted gold sheen is found on the hair and face of the statue. A clear indication of a high volume of copper mixture in the metal alloy, which is consistent with statues created in Newar of Nepal. Evidently, the repoussè of a three-spoked “triskele” inside a large double-vajra on the base plate confirmed that the statue was made in a Tibetan workshop, and it has been consecrated with a ritual blessing (rab gnas) by a lama or Rinpoche. In terms of style and iconography, this finely cast Shiva is a perfect fusion of Hinduism and Buddhism in the Kathmandu region where Buddhism and Hinduism meet. 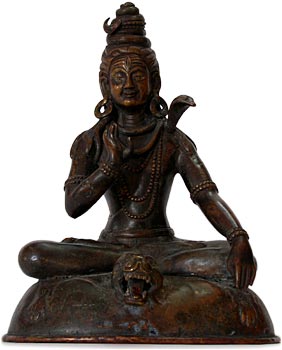 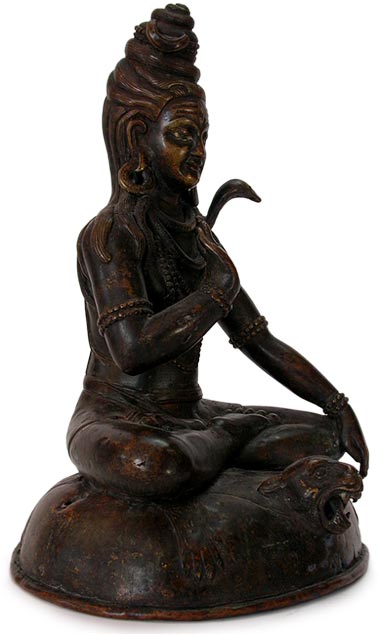 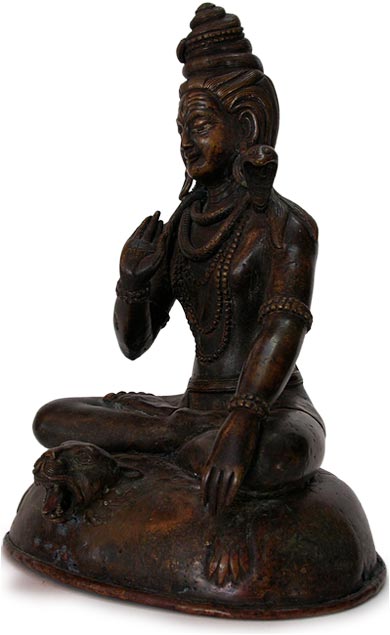 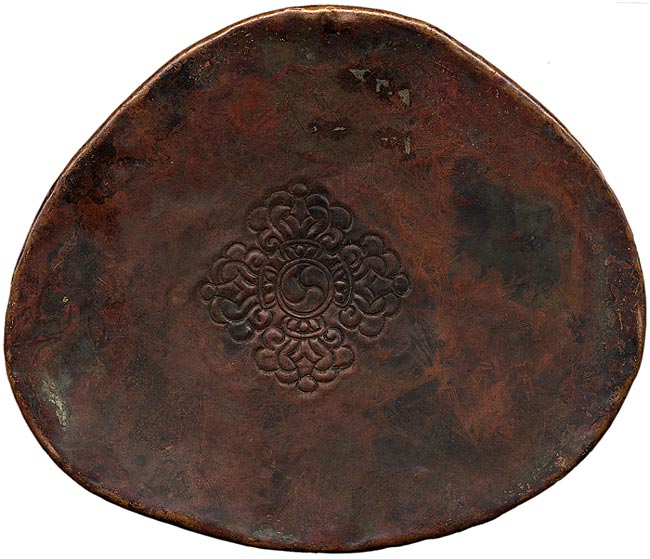 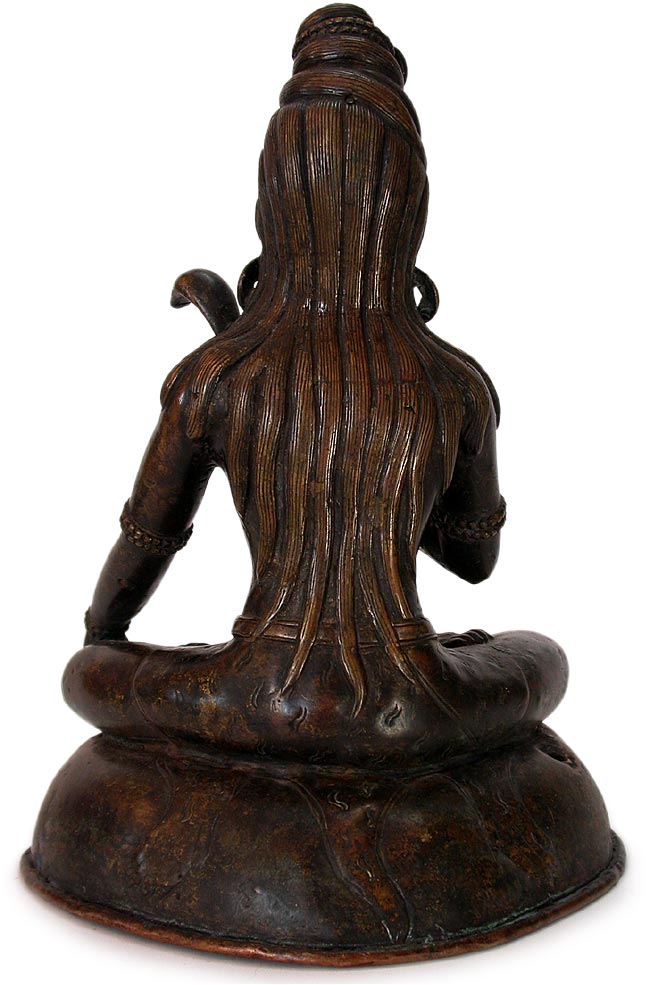 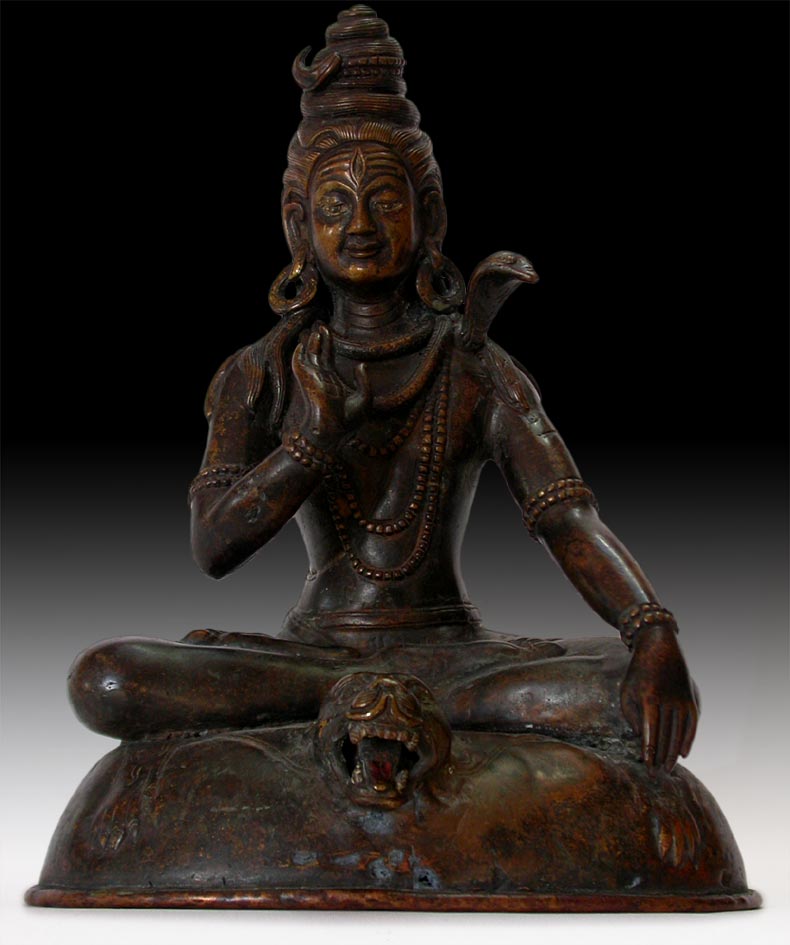