Vintage Japanese Lacquered Bronze Statue
While already assured of Buddhahood, Kannon remains in this world to comfort suffering sentient beings. Perhaps because of the maternal, feminine traits and gentle expressions, statues of Kannon inspire a greater affection in Japan than do any other Buddhist figures.
Cast with exceptional skill in heavy bronze, lacquered and tinted in copper red, polished to a glossy silken surface with a mellow patina. At first glance, this unusual representation of Kannon displaying the Western influence which penetrated Japan during the late Edo era. Realistic and beautifully rendered, the face of the Compassionate Bosatsu is turning toward her left, eyes downcast in contemplative reverie, bared feet, and hands holding a scroll, her sumptuous robe flows along pronounce outlines and defined supple symmetry. Signed in Kanji: Saku Sennin (Made Immortal); the straightforward seriousness of this Kannon statue reveals the reverence and devotion of the artist. 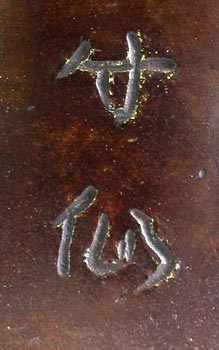 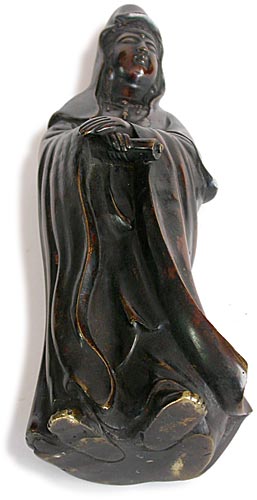