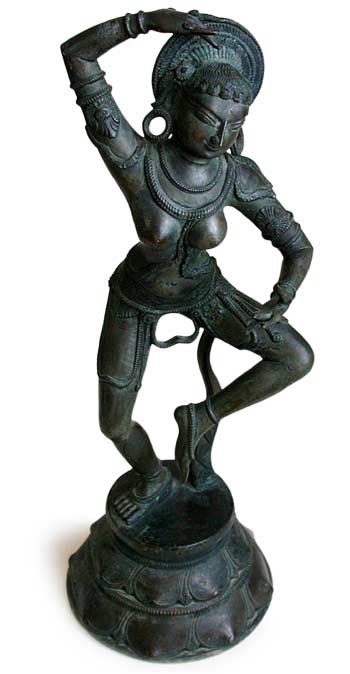 Dancing Devi is first seen as a cosmic force, through which she creates, annihilates, and recreates the universe. In her gentle, radiant Dakini form, she is the gracious grantor of boons, wealth, fortune, and success. As shown in this elegantly executed bronze, she represents the archetype goddess. A manifestation of nature, fertility spirits, and celestial nymphs; with only minor variations for female deities across Hindu and Buddhist faith.

Dancing gracefully upon a drop-leaf double lotus base, this superbly cast figure admirably displays the sensuality of the divine feminine. The mannered elegant shown here is an excellent example for the stylistic evolution through the ages in Indian art, and may be said that it is one of the finest of Indian sculptures. Perhaps more apparent than the darkish patina and lightly encrusted malachite developed on the solid bronze, her exceptional beauty and perfection of casting are indications of a later period. Gone are the soft pliancy of the mass seen in 10th-13th century. The ornamentation of this Dancing Devi is more sharply defined in a rich array of jewelry embellished on her opulent form. Distinguished from those of earlier Devi figures, the features of her broader face are more defined. The outlines of her slim body are more fluent. Her breasts have grown in substance, and her hips in rounded contours framing a higher waistline, which gracefully thrust outward in vibrant motions. Though that these differences are subtle, and their similarity underscored the difficulty in identifying the age of the Devi. Nevertheless, the stylistic particularities of this bronze can be safely attributed prior to the 18th century, and no earlier than the 13th century. 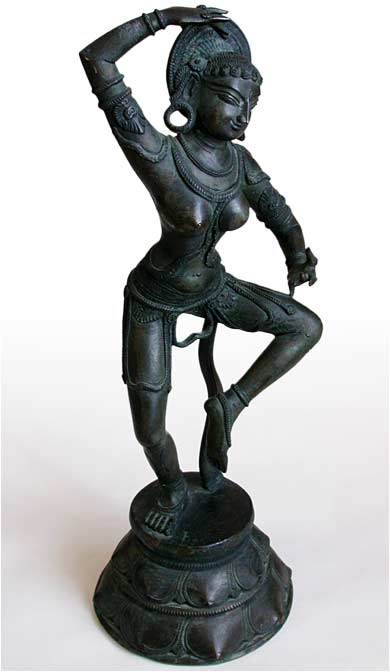 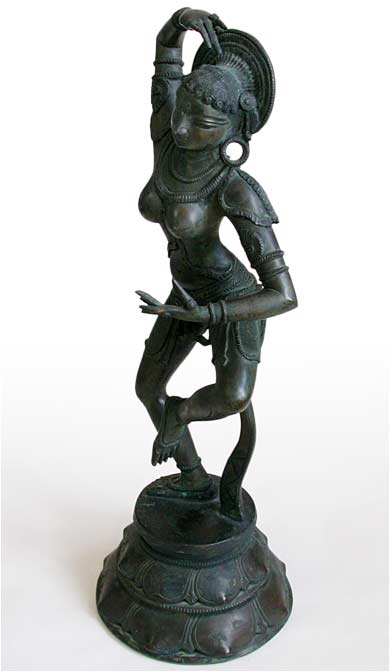